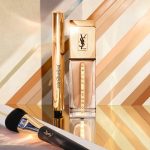 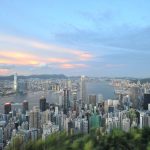 It happened almost every evening during last spring’s lockdown. After exhausting myself from yet another day of never-ending Zooming with my team, I’d simply switch screens, and try to find some escape via streaming. I’d end up non-stop clicking on the series that I had loved during my childhood—and I know that I am far from being the only one who found a bit of comfort in nostalgia during that stressful period. After so many nights spent with so many classic episodes… well, it was no surprise to see the bright tones, sharp tailoring and incredible graphics that defined my favorite ‘80s and ‘90s programs eventually work their way into my most recent designs.

My friend Maluma was quick to note that Balmain’s new relaxed Miami Vibe—with all those pastels and eye-catching patterns—was a perfect match for his distinctive style and addictive beat. And, after he was photographed giving a perfect Caribbean twist to one of my modern takes on the classic French petit-pois pattern, Maluma began working with me to create a one-of-a-kind tropical look for last year’s Video Music Awards. We ended up riffing on the sherbet tones, sexy styling and ‘80s silhouette of Crockett and Tubbs for Maluma’s amazing performance of Hawái, during last August’s show.

And, after the success of that VMA appearance, we knew we had to push our partnership further.

That’s when Maluma and I began working closely together on a whole new line of designs intended for his tour. And, although the pandemic might have forced a rescheduling, we’ve decided to release our Balmain-Maluma collaboration as a special, limited-edition collection. Those one-of-a-kind Balmain-Maluma sneakers and ready-to-wear designs will be available across the globe, on April 12th.

At the same time that Maluma and I were working on these designs, the speakers inside the Balmain atelier were blasting out a continual loop that both inspired and reflected our work. I’ve pulled that selection of tunes together for our collaboration’s special playlist, which is now available on the Apple Music Signature platform. This Balmain-Maluma seamless mix of music and fashion makes perfect sense, of course. It reflects this house’s distinctive DNA, in which music and fashion are thoroughly intertwined—and neither Maluma nor I could ever conceive of fashion without a full helping of music (or vice-versa). – Olivier Rousteing

I released two albums in eight months, and no one was expecting that. First, Papi Juancho, with all those vintage Miami Vice vibes, and then I went to Jamaica and fell in love with the culture there. I feel like Olivier and Balmain does that, too, by trying to change the rules of the game every time you want to play it. This collaboration represents us merging our fashion and music worlds, and breaking the rules with style, colors and mostly importantly blending our cultures together.

It’s been one of my goals to work with a respected fashion house on a collection, but this journey was more exciting, as Olivier pushed me to design with him and sketch looks that I personally will wear off the stage and showcase high couture with a bit of Papi Juancho. This process was exciting as I have always dreamt to design one day, and I was happy to have a friend like Olivier let me express creatively through fashion. – Maluma

10 OF THE COOLEST ROOFTOP BARS IN HONG KONG