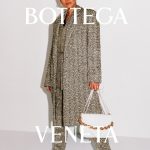 Balenciaga’s Spring 22 presentation considers our shifting senses of reality through the lens oftechnology. We see our world through a filter—perfected, polished, conformed, photoshopped. We no longer decipher between unedited and altered, genuine and counterfeit, tangible and conceptual, fact and fiction, fake and deepfake. Technology creates alternate realities and identities, a world of digital clones.

To illustrate this concept, every look in the Spring 22 collection is seen on Eliza Douglas, an artist who has either opened or closed every show and appeared in most campaigns for the past several years. In a video directed by Quentin Deronzier, Eliza appears as a series of digital clones, some of which are deepfakes, ormodels with Eliza’s photogrammetry-captured and CG-scanned face digitally grafted on.

Some looks are styled to illustrate artificial manipulation using props, like chainmail headpieces in silver, gold, chrome, and rusted metal. The models march down a minimalist runway to a sci-fi-inspiredsoundtrack composed by BFRND and an AI voiceover reciting the lyrics of “La Vie En Rose.” The video’spost-production processes include planar tracking, rotoscoping, machine learning, and 3D modeling, implemented in order to achieve a hyper-realistic effect.

The season introduces a range of new shapes and wearable concepts and functional accessories, as wellas products from The Hacker Project, conceptual interpretations of Gucci’s recognizable signatures asBalenciaga products. The Hacker Project presents pieces that merge Gucci and Balenciaga House codes and in so doing explores and questions the ideas of authenticity, counterfeiting, and appropriation within the fashion industry. For example, an archival double-G diamond monogram design is transformed to consist of double-B logos in Gucci’s iconic tone-on-tone palette on a variety of leather goods and classic accessories. The line, which also includes limited edition bags hand-tagged with This Is Not a Gucci Bag, will be in stores starting in November of 2021.

Tailoring is deconstructed and engineered to sit off the body in various silhouettes. Dresses are patched, draped, and ultra-pleated, forming cocoon-like shapes in bright colors, florals, and graphic prints consisting of overviews of Balenciaga products mimicking icons on a computer desktop. Wrap coats recall a classic Balenciaga cocoon construction, but safety-pinned to one side and frayed at the hem. Trenches, coat dresses, and bombers are mostly reversible, giving the same garment two aesthetic functions.

Each a Balenciaga signature, the parka and the puffer have shortened sleeves and lengthened collars that stand up and away from the neck to underline the typical Balenciaga attitude built into the construction of those garments. Another new signature, the tracksuit, is seen in multiple styles and functionalities. Tactical cargo pants transform into coveralls and cyber goth-style raver pants; skirts in denim are tricked out with metal hoops and studs, optimizing zippers, side pockets, and straps.

Graphic prints reference themes of authenticity, such as a blank square that reads Your Ad Here over ahotline number. A hoodie’s strass front says Bébé (referencing the French way of pronouncing theBalenciaga double-B logo and also meaning babe); another hoodie, which reads No Comment, speaks for itself in its meaning; yet another one depicts The Simpsons family dressed in recognizable Balenciaga pieces from past seasons.

Fetish stiletto sandals, pumps, and boots emphasize the shape of toes, imprinted in soft calfskin. Ultra flats and pumps take on the shape of toes in carbon effect flexible high-tech material. Blade pumps and boots are defined by their super-sharp lines. Balenciaga Crocs 2.0, the second collaboration between the two brands, sees the classic clog made into pumps, boots, and platformed pool slides. Trooper boots and derbies are thick-soled, square-toed, and angular on all sides. Runner sneakers, introduced in Winter 21, have a DIY, cut up aesthetic in the shape of a traditional running shoe.

Continuing a series of modern interpretations of archetypal bags are the Mag Basket in thermoformed leather, the Fast Clutch in carbon fiber that resembles the shape of fast-food packaging, the Monday Shopper in printed soft calf leather, and the Hourglass Frame, which adjusts the iconic bag’s shape, givingit softer and rounder volume.

Eveningwear is reimagined in a corseted molleton pant suit, a variety of matte spandex draped dresses, and finally a red stretch velvet ballroom gown inspired by and in tribute to Divine, the iconic drag artist.

In conversation with Jeremiah Berko Fordjour