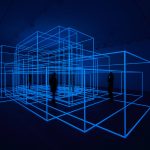 In upcoming imagery and videos, models embrace one another and make eye  contact with the viewer while a flashbulb goes off. The campaign cast holds the  recently launched Lindsey, Crush, and Crocs Bag, as well as the XX, Hourglass,  Everyday Tote, and Le Cagole in new styles and contexts.

Also featured is a variety of Balenciaga Jewelry, the Excavator Boot, the  Kensington Mule, the thigh-high Falkon Boot, the Knife Pump, Five-pocket  Pantaboots, and three-piece jeans that are a miniskirt, pants, and boots all at  once. Other ready-to-wear items include robe coats, shrunken tops, distressed  trenches, deconstructed slip dresses, and extra tight or extra baggy separates.  Low-slung pants that expose Balenciaga Underwear are encircled with Double-B  buckled belts.

IN GROUND, VOORLINDEN INVITES YOU the viewer TO BECOME THE SUBJECT