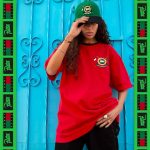 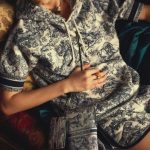 RTH is a shop in West Hollywood in Los Angeles known for its one-of-a-kind selection of jeans, leather goods and ceramics, all curated by René Holguin.

Jean and Judith Touitou were long time fans of RTH and became friends with René as well, leading today to a very natural interaction with RTH available for both men and women.

The RTH jacket and jeans are in washed indigo and decorated with paint stains. In raw denim, a new cut was developed: the René jeans.

Other pieces compose the Interaction: one jacket with short sleeves, one ponchirt (half poncho, half shirt), one bandana, two shirts for men, one shirt and one dress for women. The A.P.C. sneakers were developed in a model specially for RTH with beige tones. Multiple pieces perfect for Summer in jersey as well including two visuals dear to René: a peace sign (present on a T-shirt and a sweat shirt for both men and women) and the phrase “Somos iguales” meaning “we are equal”, “we are the same” in Spanish.

The campaign was shot in Los Angeles where René’s friends wore the collection.

In stores on April 8th.