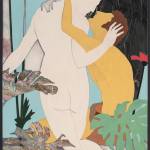 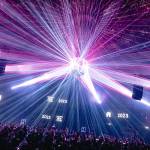 Anne Imhof is a German all-round artist, focusing on visual art, music composing, choreography and is most well-known for her performance art. She gained popularity internationally in 2017 when she presented ‘FAUST’ at the Venice Biennale. Since then, she has not stopped creating, having staged in Europe’s most admired museums, like London’s Tate Modern and Paris’s Palais the Tokyo.

This time she slightly drifted away from the live performance art and turned Stedelijk’s lower-level gallery into a sensorial dystopic labyrinth. The installation is a blend of architectural constructions, instrumental sounds, and visual art elements like video recordings and paintings. With themes like collectivism, loneliness, and nihilism she is seen as the voice of the new generation. And for good reason, as her art exactly knows how to trigger collective questions about the existence of life and humans as individuals.

Upon arrival at Stedelijk, already at the entrance of the reconstructed basement falls an unheimlich but nostalgic feeling over you. The piled-up school lockers bring up youthful memories from times in school or the gym, when you were questioning your identity and development. They’re built into a maze, with an occasional opening to a different area. Here physical artworks, like drawings and paintings are revealed. The positioning of the lockers suggests that our freedom of movement is restricted, just like the impression of confinement society can sometimes create.

While passing through the maze several videos are exposed, showing the recognizable avatar, a common theme in Anne’s work. The videos, among ‘Al Winter’ and ‘Fate’, grab your attention due to the penetrating look of Anne’s muse and long-term collaborator Eliza Douglas. Wonderful footage in the snowy environment of Russia, shot just before the war, where Eliza is walking through the ruins of neo-classical buildings and horses galloping gives a sudden serene calmness in the middle of the labyrinth.

Abruptly the grey locker installation is taken over by a trail of water tanks, car tires, smoked glass walls, and other objects surrounded by red lights. Rotating speakers on rails create an alienated sound experience. The objects are raising a question: ‘Have they been used already or are they waiting to have a purpose?’. It sheds light on a cause that occupies Anne’s mind: ‘There is a moment right now where nothing is sure’.

You can experience Anne Imhof’s disorienting installation at the Stedelijk until January 29, 2023.

AWAKENINGS NEW YEARS EVE WAS ONCE AGAIN A PHENOMENAL EXPERIENCE