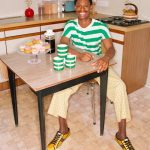 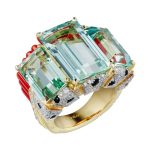 This season’s story is somewhatunique and calls for a di erentkind of introduction. You see, a motley crew of characters had ar- rived in Paris, one unrulier than the other. Zoooom with friends, they called them, for Zoooom was their guide and time travelled fast in their pace.

In the age-old City of Lights, no stranger to the rebel, our colour- ful characters loaded their LouisVuitton trunks with the nest n-eries they could nd, boarded abarge and sailed into the sun, which always rises in the East…

Through the ve days of fashionweek, the colourful rascals swept through the city’s gilded salons, went wild at Louis Vuitton, and cruised down the River Seine leav- ing behind them a rainbow tracetrans xed across the Paris sky.

And when they left, Paris felt a little empty. Where did Zoooom with friends go? Would they everreturn? Sure they would, but rstthey had a voyage to make. What you had witnessed here could be the end of a particularly riotous story. But it wasn’t. It was the beginning.

“Sacrebleu!” cried the good folk of Paris as Zoooom with friends turned tradition on its head, painting the town and the hallowed halls of Asnières. But fright soon turned to fondness, for unusual as they were, they brought only good intentions.

[SUR]NATUREL FROM FIGURATION TO ABSTRACTION BY CARTIER