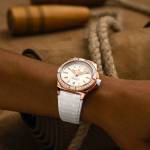 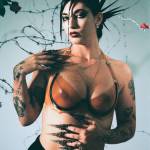 Angolan interdisciplinary artist Sandra Poulson presents a new site-specific installation work, ‘If the Equator Shifts 90º, Does It Go from a Border to a Highway, or maybe to a Footpath?’ in collaboration with Acne Studios. Made in response to the seasonal scarves, including; Vesta, Canada and Vernon, the work is presented at Acne Studios’ Stockholm flagship Norrmalmstorg.

Titled ‘If the Equator Shifts 90º, Does It Go from a Border to a Highway, or maybe to a Footpath?’ the installation explores the political, cultural, and socio-economic landscape of Angola, Poulson’s country, using a variety of materials including fabric, concrete, aluminium, jesmonite and wood. She often returns to lived experiences in Luanda, where Poulson splits her time, as central case studies in her work.

The installation created continues Sandra Poulson’s investigation of plants as cultural symbols and the power dynamics between the ‘Global-South’ and the ‘Global-North.’ The project started as Poulson reflected upon the Angolan government’s import of 3000 Miami palm trees to beautify Luanda Bay. The ‘Miami palm trees’ gradually died as this specific species could not climatise to Angolan weather conditions. To Poulson, the problematic and questionable transportation of 3000 trees is an example of the perception of ‘near-north’ – ‘near-south’ exchanges, with a focus on the direction that tends to take place. It seems the ‘Miami Palm trees’ were more than trees, they added value to the image of Luanda Bay solely because they originated from the ‘Near-North.’

The work is comprised of Acne Studios’ scarf styles Vesta, Canada and Vernon, pulled away from their primary purpose, taking the form of Luandan palm tree leaves juxtaposed against the backdrop of a cold Stockholm climate where tropical trees do not grow. A wool scarf is reimagined: “The work is interested in challenging the meaning of movements of value and currencies. While reflecting upon the framework of coloniality that enables value calculations to be often based on geographies, and north proximity,” says Poulson of the installation.

Sandra Poulson’s installation is on show at Acne Studios Norrmalmstorg from 17th November to 12th December 2022.