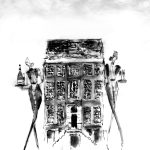 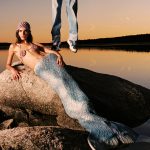 It was only a matter of time before Jessica Ogden would participate in the A.P.C. Interactions. Jean Touitou began these capsules as a way of working with friends of A.P.C. and Jessica has become like family since she began working with A.P.C. First on a customisation project in the early 2000s and then the creation of Madras. While the Madras collection stopped the collaboration evolved when Jean asked Jessica to rework surplus A.P.C. fabrics into quilts. These limited “rounds” have gained a cult following and tend to sell out immediately.

It also comes as no surprise then that Jessica would use A.P.C. fabrics as the starting point of this Interaction. Both Jessica and Jean are drawn to the idea of giving fabrics a second life and also ensuring sustainability through reduction in waste. Jessica also enjoys the challenges associated with the parameters this throws up when trying to piece together the puzzle of what are essentially limited meterage of fabrics.

Jessica tapped strongly into the history of her own ready-to-wear label. Signature elements such as quilted denim, patchwork plaid and smock details all add a more visceral texture to the garments. Jessica also wanted an ease to the shapes, so the jeans have an 80s cut, while the tops are all oversized. Skirt lengths end at the mid-calf, and shirt tails are a repeating feature. The sailor ribbon, which has been a constant obsession of Jessica’s, makes a reappearance.

A pineapple motif brings colour to t-shirts and sweatshirts and is a nod to the area in Ocho Rios, Jamaica, where Jessica first grew up and in recent years has made her home again. Finally, Jessica developed a logo for the Interaction featuring a needle and thread, it tells the personal story of Jean and Jessica’s mutual love of sewing, as if history could be written with the logo itself.

GCDS LAUNCHES A CAPSULE COLLECTION IN COLLABORATION WITH ONE PIECE