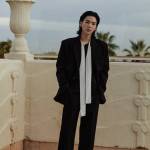 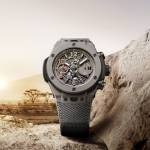 This season sees a collaboration between 1017 ALYX 9SM, and the American artist Mark Flood, that culminates with the show held within a retrospective of the artist’s work. Pieces from the season feature a selection of his iconic works, as well as graphics developed specifically for the collection.

FW23 season sees the launch of the Payton and Raya Bag. Both bags have been developed in a range of colors and materials. A unisex bag, the Payton, comes in plain, textured and hand painted leather; which features newly developed Alyx hardware, in a small yet practical form factor. The women’s Raya bag, developed for this season, also features new Alyx hardware and comes in a range of vegan-leather options. Both bags come in a range of variations that feature all over prints as part of the Mark Flood collaboration.

Following the developments of SS23, this season features a new chunky sole that has been integrated into all shoes featured in the collection. Highly graphic, the sole was developed using the knowhow acquired during the development of the Mono range, to create a thick statement sole that is visually impactful while simultaneously incredibly lightweight. The signature sole is then mounted upon a range of textured leather uppers, in a mid boot shape, recalling an exaggerated biker boot and is featured in all mens looks of the collection.

Alyx has always had an intense focus on material and fabric development, with a desire to merge the technical cutting edge with traditional artisanal knowhow. This season features new examples of this desire to push the limits in the form of hoodies, pants, and t-shirts that have undergone dying, washing, printing, and burning to then be meticulously hand distressed by Italian artisans. Other pieces see the expanded use of proprietary distressing techniques that create randomized small areas of distressing in the garment that will make the piece change and adapt with wear, slowly revealing the layers underneath. Featured in many of the looks, the collection also features stud detailing that has been hand-applied by Italian artisans on a range of pieces from bandanas, to boots, to classic tailoring pieces.

Make up by Giorgia Lecce

HUBLOT AT THE LVMH WATCH WEEK 2023